EuroTankWorks produces horizontal steel tanks (HST) for storage, loading and dispensing of liquid materials with mass density not exceeding 1 t/m³ at the temperature from -60°С to +90°С.

You can choose for yourself an HST tank of suitable capacity from our standard designs, or order us an individual design.

Manufacturing of a tank is carried out in 4 stages 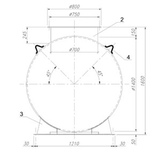 For all horizontal tanks in our Design office we have got detailed metal framework graphical drafts already done. Herewith they always will be finalized according to requirements of the Customer. 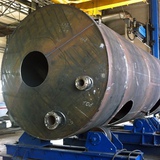 We assemble the tank elements (pre-rolled shells and spherical bottoms) using the columned welding keys in automatic regime. All welds are performed back to back. 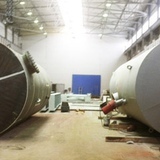 Applying coating is carried out with preliminary bead blasting processing, degreasing an dust removal. The coated units are dried in special premises, where the temperature, humidity and dust content are strictly controlled. 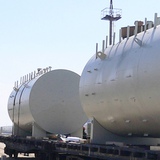 Delivery is carried out by means of motor or railway transport.

According to our experience, horizontal steel tanks are basically used at tank farms and petrol stations as they are considered to be the most effective type of fuel storage equipment both from economic and technical points of view. Effectiveness of this tank type is provided, in the first place, by the variety of loading capacity and shapes, which are adjusted to the specific features of the enterprise.

Horizontal double skinned tanks guarantee the tightness of the tank and the absence of leaks of environmentally hazardous substances.

With the increasing stringency of environmental requirements, they began to be widely used in most industrial enterprises, performing many functions: reception, delivery, storage of substances.

The steel horizontal double skinned oil tank is a special vessel with two shells and free space between them. The interstice – the area between two shells - is filled with antifreeze or gaseous nitrogen. The distance between the shells should not be less than 4 mm.

Compared with the single skin oil tanks, this type of storage tanks has several advantages:

The use of horizontal double skinned tanks is not limited to the oil industry - they are also quite successfully used in other spheres, for example agriculture, where they play the role of storage of chemicals necessary for the mineral fertilizers production.

The main equipment necessary for the reliable and safe operation of double skinned oil tanks is measuring instruments, level gauges, vapor detectors and devices for draining and loading products.

During operation, it is very important to monitor the excess fluid pressure in the interstice. It should not exceed 0.001 MPa. A decrease in pressure signals the possible entry of the stored product into the area between the walls.

Triggering vapor detector sensors that are mounted on the necks of double skinned oil tank may also indicate a possible depressurization.

All versions of horizontal tanks may be produced with either one or several sections. The sections are formed by special separating walls inside the shell . Thus the horizontal tank becomes divided into two or more sections, meant for storing different types of materials. While producing two-section or multi-section tanks we guarantee the leak tightness of the sections.

There are several types of bearing part to be produced:

The body of the horizontal tank consists of cylindrical and end wall parts. The cylindrical part is also usually called “a wall” and the end wall elements – bottoms.

Cylindrical part of the body, i.e. tank wall, bears metal shells in the quantity, stipulated in the design project, and amounting to 3.25 m in diameter. The metal thickness is determined by durability and stability calculations. The shells are welded end-to-end while the assembly seal may be done overlapped. The body of the tank is often assembled with stiffening rings.

The bottoms of horizontal tanks can belong to either of the following types:

Automatic and auto-manual welding equipment Lincoln Electric along with the modern complex of metal-processing machines are used in our production. This enables us to provide an excellent quality of tank installation together with the decrease in the time of production and manual work expenses.

Our customers are always able to purchase a horizontal tank, produced according to our standard graphical drafts.

However the recent years have seen more frequent orders for production of individually planned horizontal tanks in non-standard size. This is mostly due to the fact that it gives the customer a choice of the tank parameters depending on operating cycle of the enterprise, specific features of the installation site, characteristics of the stored product, etc. That is why we often work out detailed engineering drawings according to the specific demands of the customer.