Horizontal steel tanks (HST) are part of the product line of our factory. They can be used in all industries for the storage of all kinds of liquids, including hazardous.

The HST-5 tank is a shop-welded vessel with a storage volume of 5 cubic meters.

We offer you a standard tank HST-5 of our design.

We also can develop design drawings according to your specific requirements and fabricate a tank based on them.

A horizontal tank with a volume of 5 cubic meters can be made for above-ground and underground placement. In the drawings you can see their design features.

Depending on the chemical composition of the stored product, we will select the optimal internal anti-corrosion coating.

If necessary, we will produce HST-5 with thermal insulation. 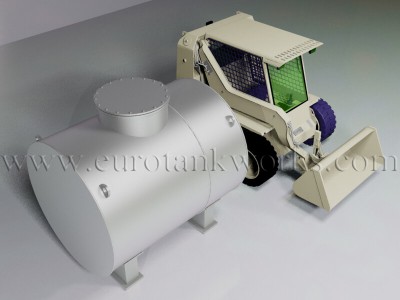 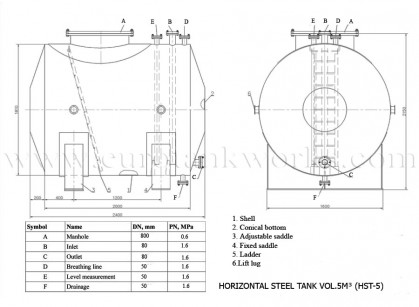 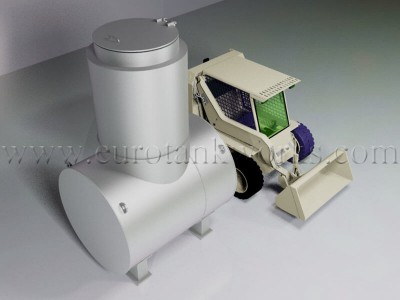 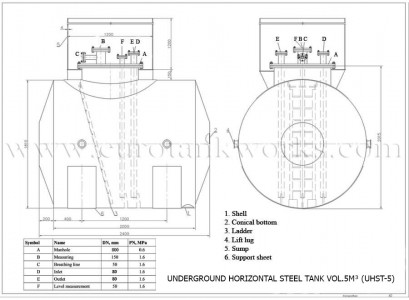 >>>SEE HOW WE FABRICATE HORIZONTAL TANKS

Options for the HST-5 fabrication

Horizontal tanks can be double-skinned (double-walled) and single skinned (single-walled).

In the course of production of a double-skinned tank the space between the walls is filled with either nitrogen or liquid material. The space is filled to its full volume and the tank is equipped with the system of hermetical pumpout.

Requirements for the filler liquid material:

All above-mentioned versions of horizontal tanks may be produced with either one or several sections. The sections are formed by special separating walls inside the body of the tank. Thus the horizontal tank becomes divided into two or more sections, meant for storing different types of materials. While producing two-section or multi-section tanks we guarantee the leak tightness of the sections.

The basic technical characteristics of EuroTankWorks horizontal steel 5 m ³ tanks in their various versions are to be seen in the table below: